Today we boarded a boat and spent the afternoon exploring Ynys Enlli (Bardsey Island), a pilgrim destination for centuries but also an interesting community with a history that includes self-declared kings, a commitment to biodiversity and the arts, and a greater connection to the rest of the world than one might imagine for a tiny island that (to some of us at least) seems quite remote. It is said that three pilgrimages to Bardsey was deemed equivalent to one pilgrimage to Rome — so one down, two to go? 😉

The day began with a short walk from Aberdaron to Porth Meudwy. I spotted what looked like a good path at the end of the beach at Aberdaron, but my parents started us out at the end of the National Trust car park in the village. I had a good laugh when we walked up a big hill and then right back down a set of stairs to beach level, to pick up the path I’d seen. (No, I won’t let you forget that particular told-you-so!) The light was gorgeous as we looked back at Aberdaron. 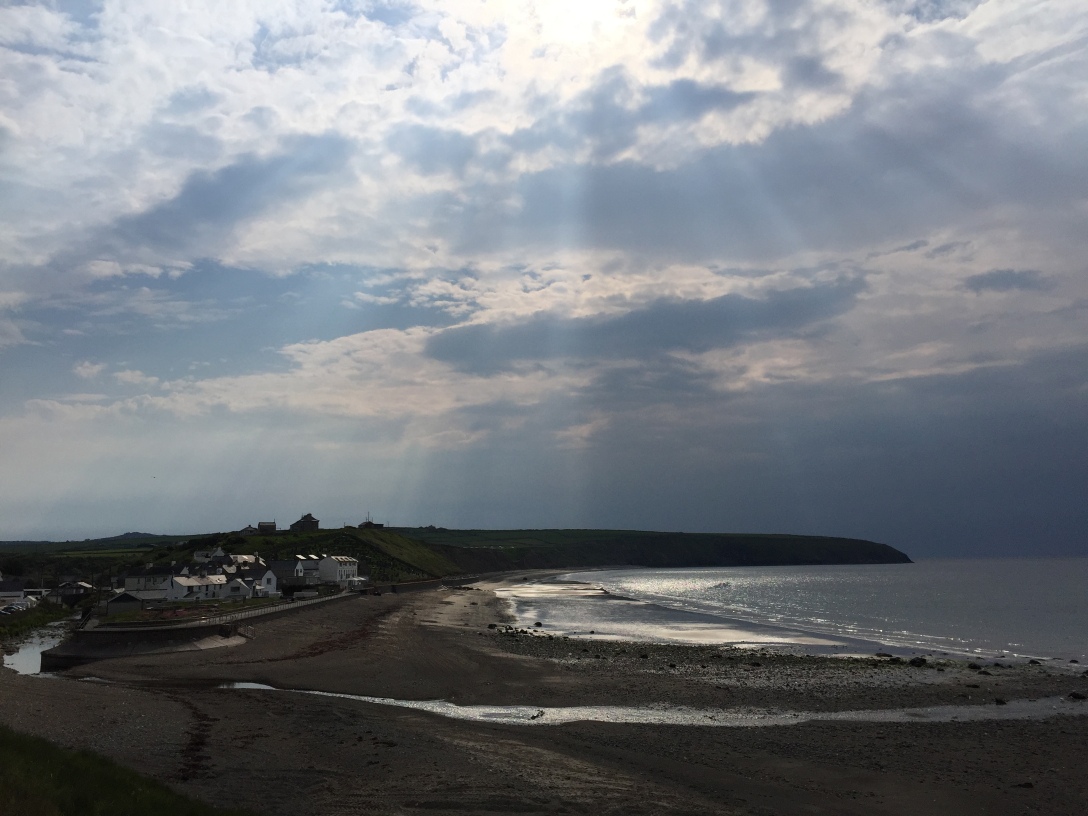 We arrived at Porth Meudwy and, lo and behold, our fellow walkers from Tudweiliog were there! We had a good chat with them while waiting for the boat and on the ride to and from the island — really lovely women who were doing some walking as part of a holiday.

As we approached Bardsey Island, Colin (who grew up on the island and still lives there) took us around to see the many birds in the area. They thrive on the island, which has no rats, and as a result we saw many puffins, choughs, razorbills, guillemots, and of course seagulls. We even caught a glimpse of what looked to be a peregrine falcon. 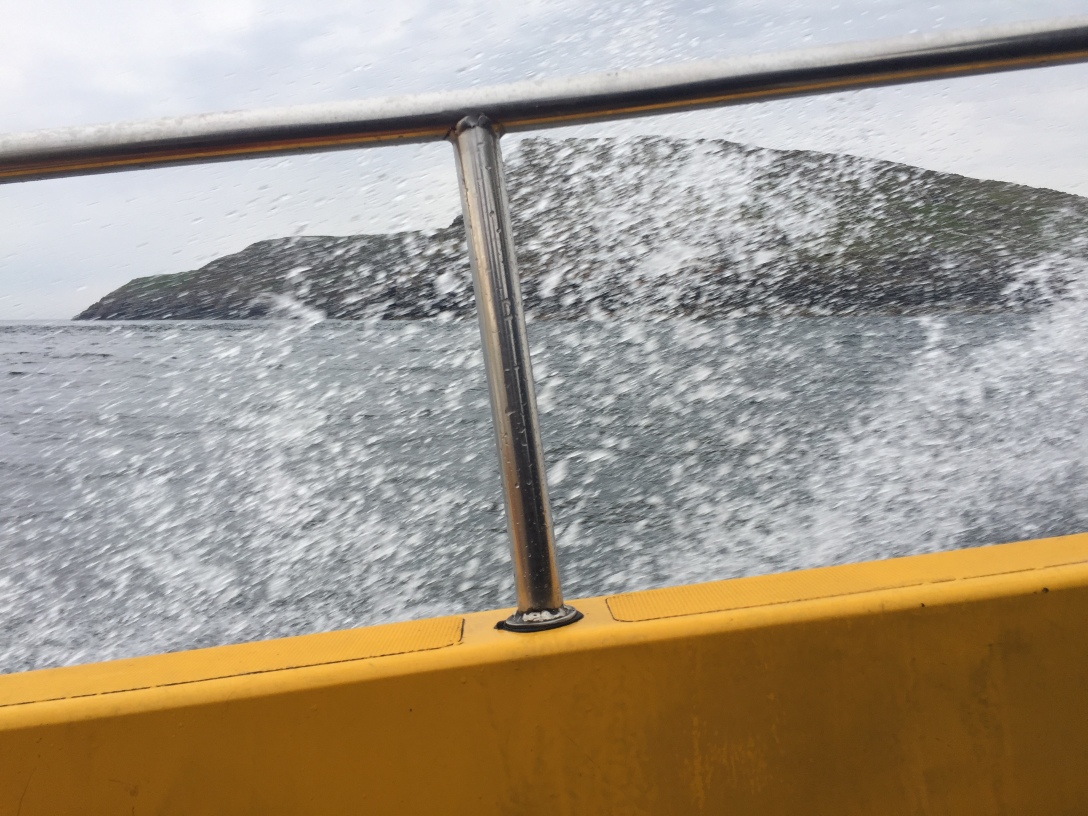 After landing, Colin gave us an entertaining introduction to the history of the island, answered some questions, and gave us the lay of the land. The lighthouse sits on one end, with a smattering of houses and other buildings spread across the island’s length alongside one large hill. We decided to forego walking to the lighthouse and instead walk up the lane toward the buildings. 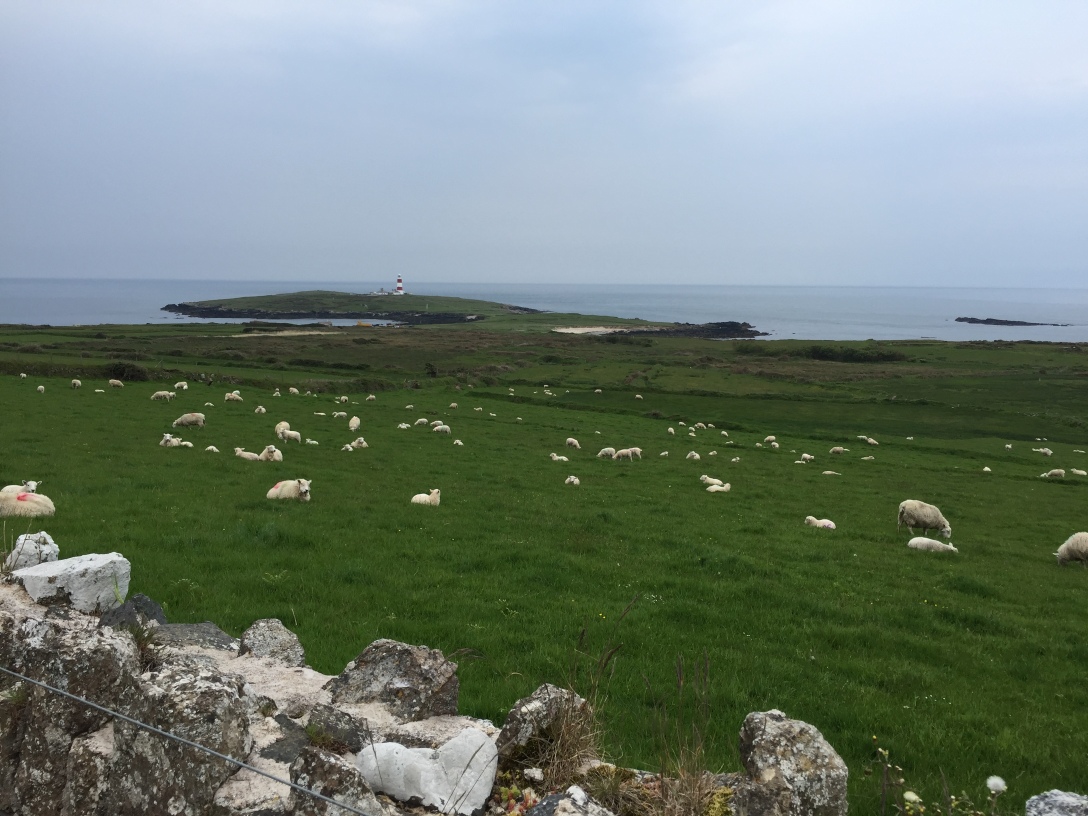 Soon enough we were walking up the side of the hill, looking for a hermit’s cave that my brother had noticed on Google Maps. In a burst of energy, I decided to be a bit of a mountain goat and bound up the hill looking for the cave, with a plan to meet my parents at the top. I never did find the cave, but I found some beautiful views and found myself quite out of breath from the running around. 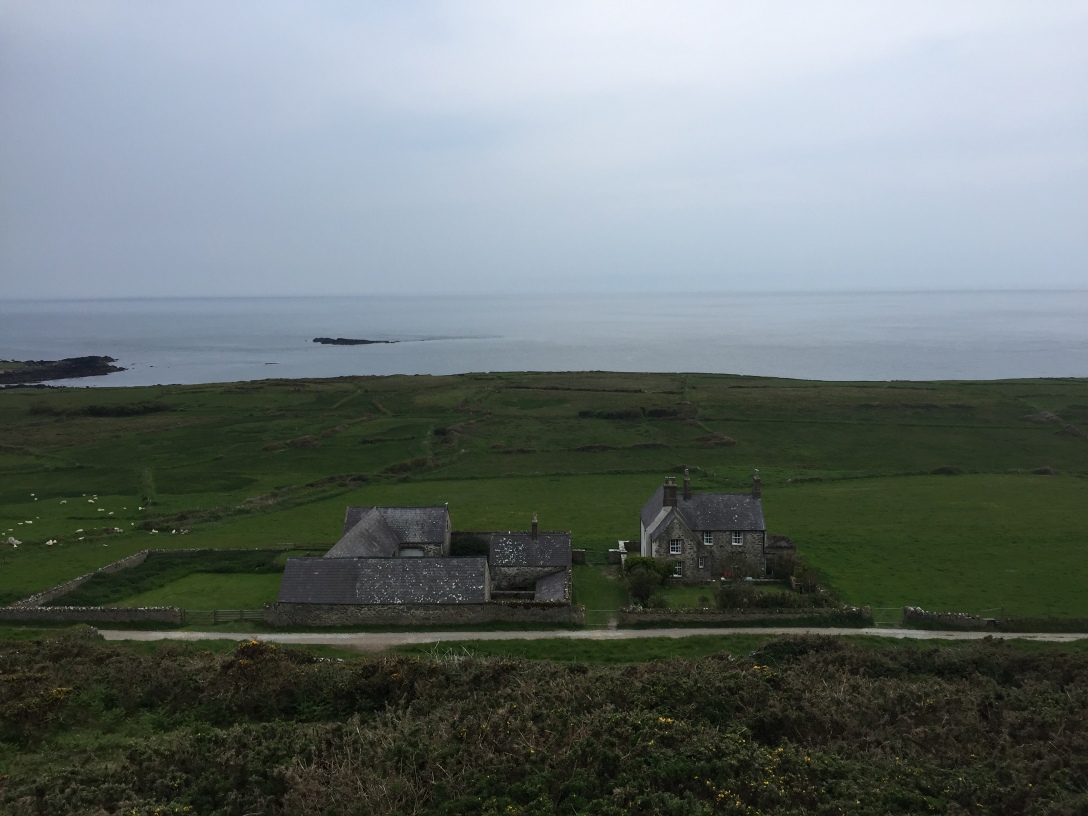 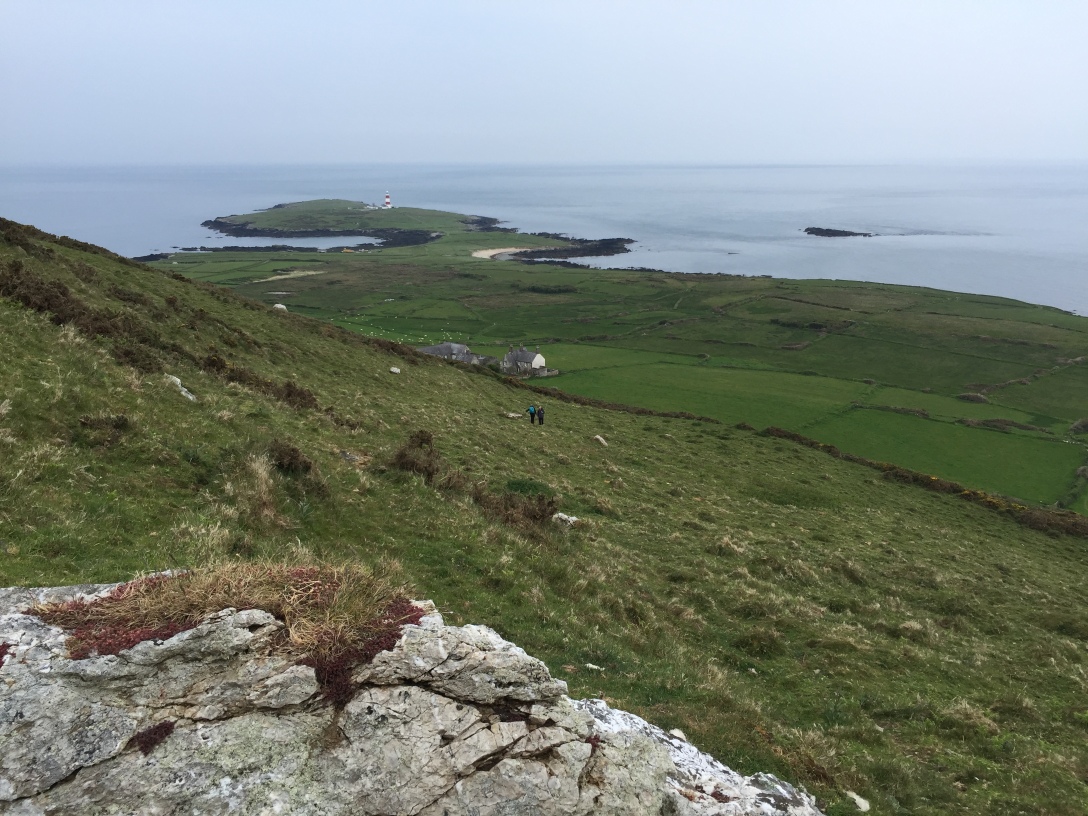 At the top of the hill we looked across at the Llyn Peninsula, which seemed even smaller and narrower than before. 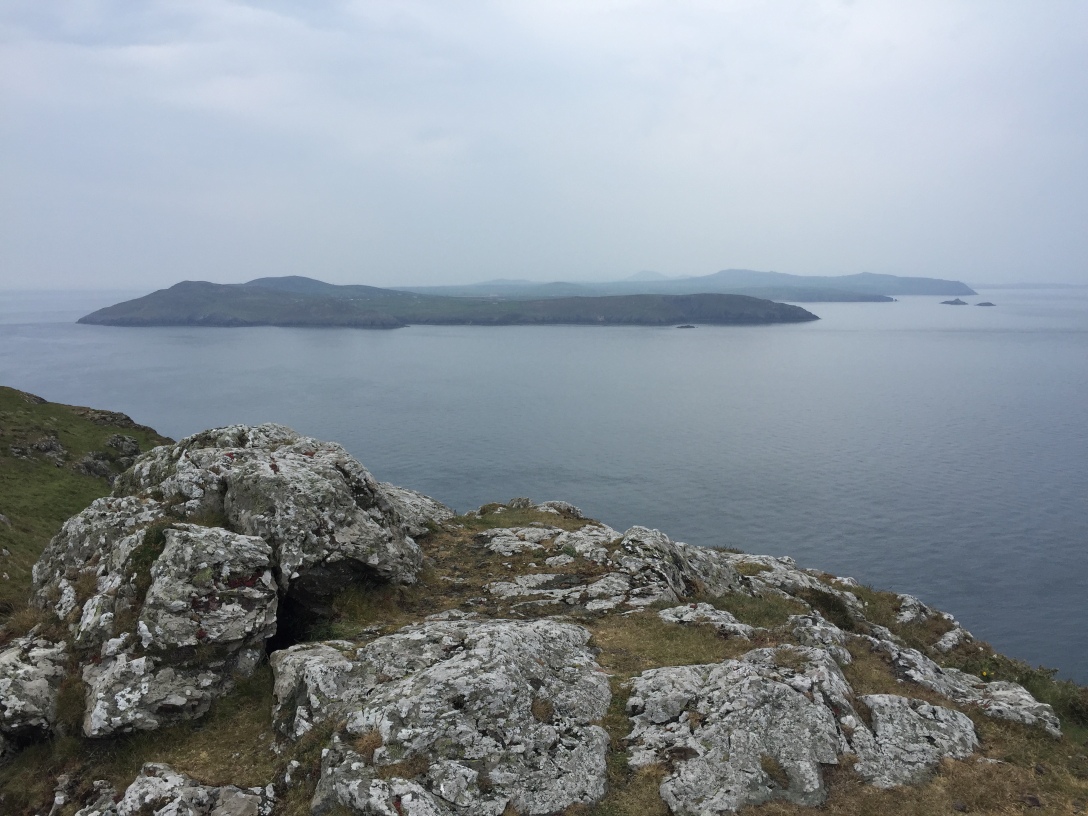 We meandered across the island, stopping to see the remains of the abbey that once stood there, the chapel, the old school, and a couple small shops. 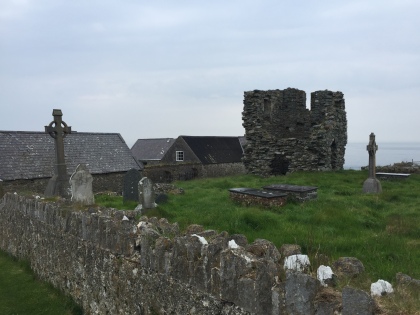 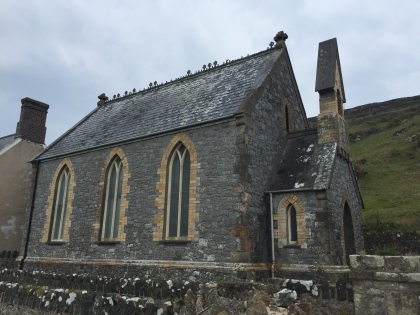 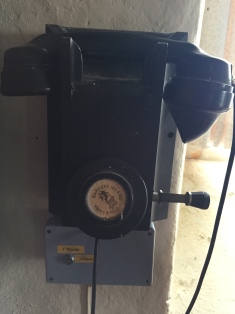 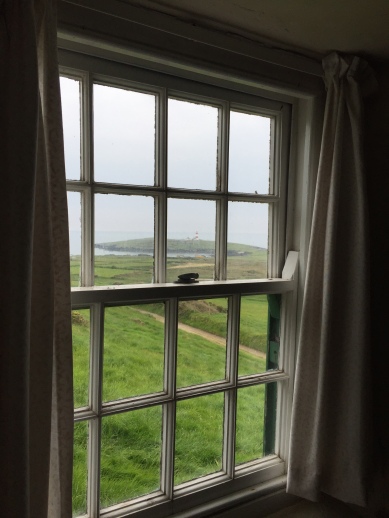 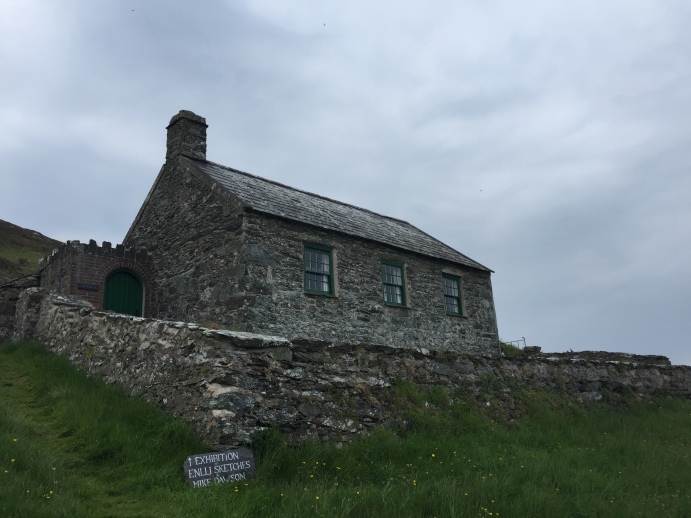 With a few minutes to spare at the end of our walk, I ran up to the lighthouse to get a slightly closer look. I don’t have any particular interest in them, but this one is unusual in being square — and I do like to see if I can find interesting perspectives of them. I didn’t really have time to find a great photo but it was a fun exploration. 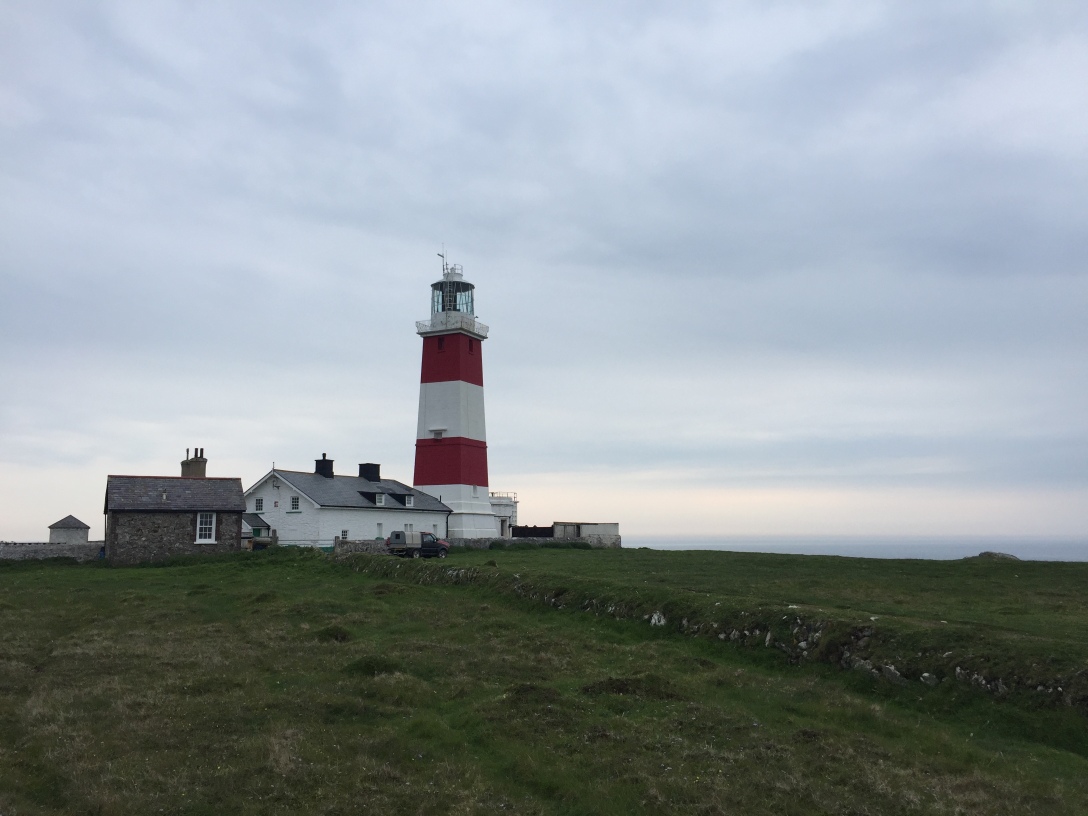 Even better, on my way back to the boat I noticed a group of seals lounging in the bay. They were playing and barking at each other, and I stopped to watch them for a bit. Then it was back across the water, where we planned to catch a few buses to Caernarfon and meet my husband for dinner.

But in the end, we didn’t need those buses. Two other visitors on the same boat as us, Barbara and Kelvin, were traveling back that way and offered to drive us to Caernarfon. It was an incredible kindness and the perfect end to all of the surprising connections and conversations we had during the walk. I am so grateful to them and to the entire experience we had on this walk, and just as happy to be returning home now. 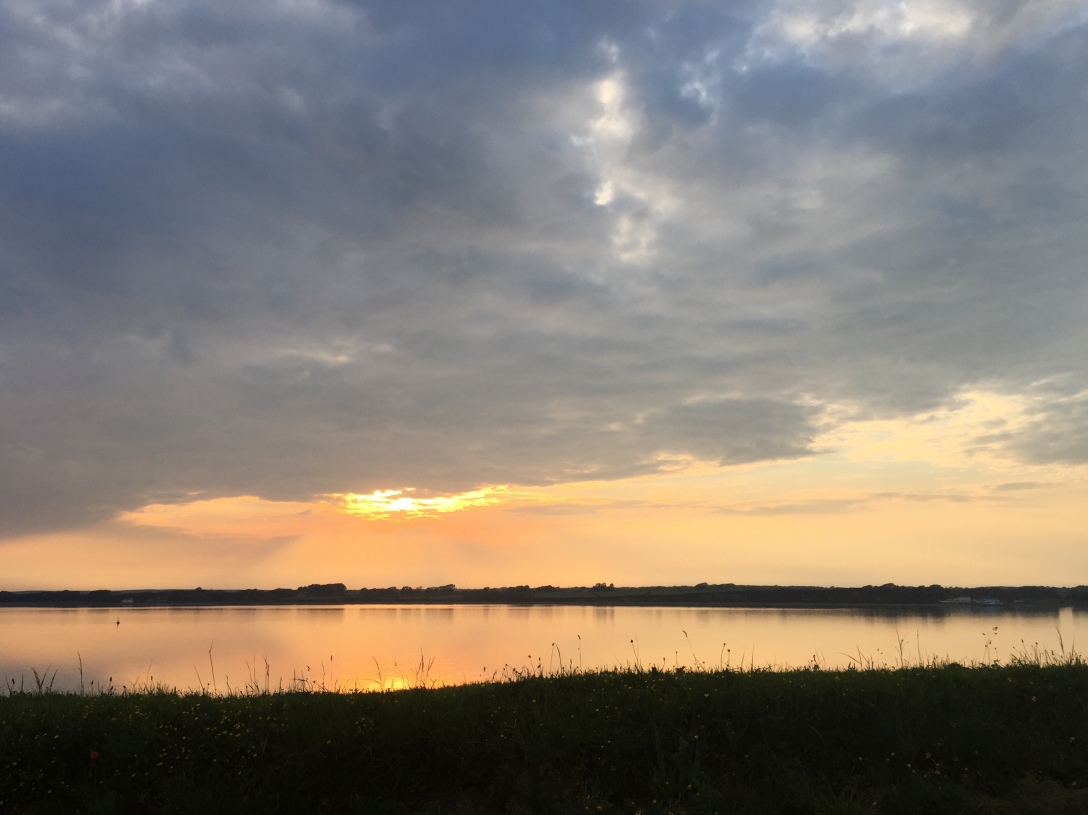