Yesterday, I was determined to make a recipe from my new cookbook, Ottolenghi: A Cookbook. I’d settled on the squash/pumpkin and parsnip soup I’d seen while browsing through the book earlier. (I’d meant to bookmark about half a dozen recipes to try first, but I ended up with at least a dozen bookmarks sticking out of the pages.) I’d flipped through to the recipe, scribbled down the ingredients I needed, and gone to the grocery store to pick up what I didn’t already have at home.

Until I opened the cookbook to start cooking.

That’s when I realized I’d bookmarked the “Parsnip and pumpkin mash” and not, as expected, a parsnip and pumpkin soup. That’s the sort of cook I am. I’ll blindly follow a recipe without questioning why a recipe for soup doesn’t have some kind of liquid in it.

Thankfully, I noticed this before starting in on the recipe, which gave me time to frantically search for solutions. I happened upon the Food & Wine recipe for Butternut squash and leek soup. Relying on that to add in some leeks and turn it into a soup, and on Ottolenghi for guidance with flavors and method, I managed to concoct a soup full of butternut squash, parsnip, and leeks.

I could pick apart the end result — too sweet, not smooth enough, missing a bit of kick — but first I need to take a moment to marvel at what I did. I’m the sort of cook who always, always follows a recipe. I’m missing the skill that lets people just throw ingredients together with a bit of intuition and turn out a nice meal. So successfully mashing together two recipes into something I enjoyed eating? I’d call it a success. 🙂

Preheat the oven to 200°C (390°F). Toss the squash and parsnips with the olive oil and a little salt and pepper and spread out in a roasting tray. (You can line the tray with foil to make cleanup easier.) Roast for 30-45 minutes, until soft and mashable.

Meanwhile, in a large saucepan, melt the butter over low heat. Add the leeks, thyme, and garlic and cook, stirring occasionally, until soft and browned, 30-40 minutes. Discard the thyme sprigs.

In a food processor or blender, blend the squash, parsnips, and leeks in batches until smooth (a couple minutes). Add as much broth as needed to blend the vegetables well.

Add the blended vegetables, remaining broth, and nutmeg to a large pot and bring to a simmer. Simmer gently until heated through. Add salt and pepper to taste. (A dash of cayenne can also liven things up.)

To serve, ladle the soup into bowls and garnish each serving with a dollop of crème fraîche and a smattering of chives. 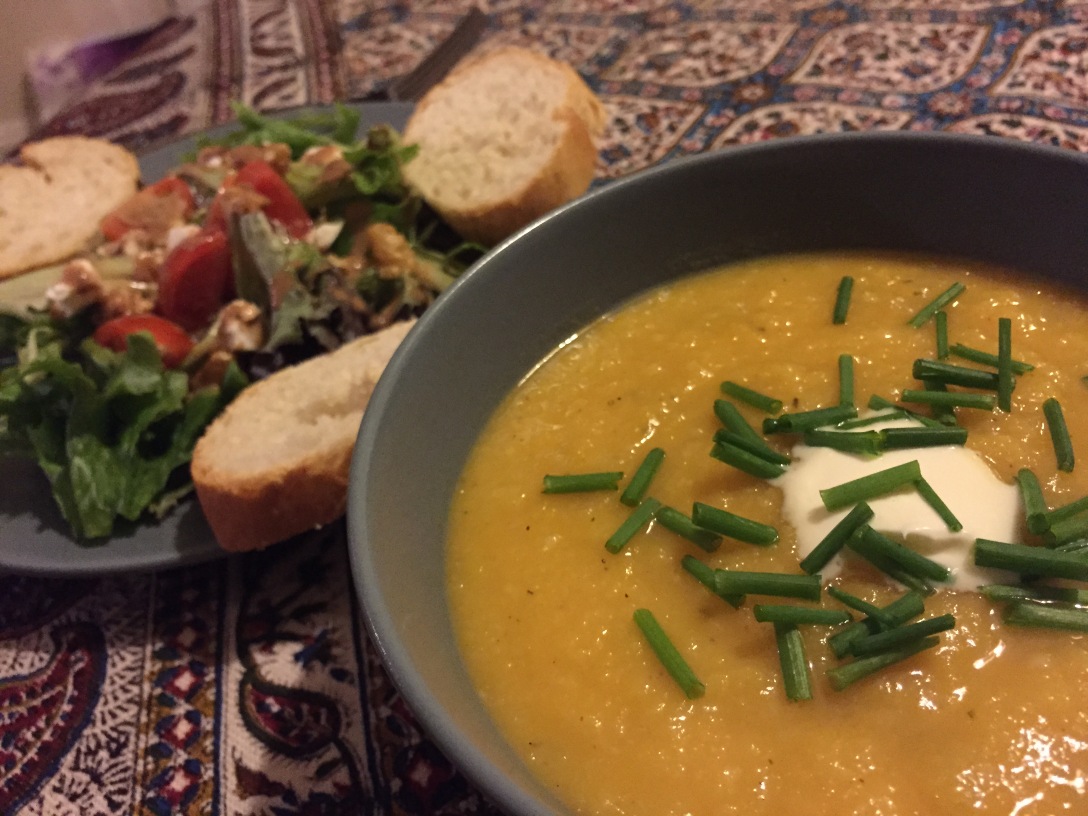 A couple notes about the recipe: